It is the period between January and May when agricultural productivity is at its lowest in Scotland (and the UK as a whole) – especially for those of us who operate organic veg box schemes. This is because it is still too cold for crops to grow, and the crops that we had for over the winter are are running out. 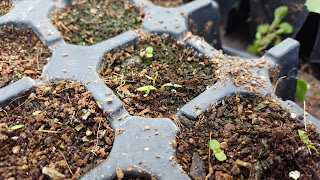 Once the cold begins to recede the soil starts to warm up and dry out, and even though we’re busy sowing seeds and propagating plants, there is very little produce coming off the farm. People don’t notice it when buying from the supermarkets as they fly in their produce from around the world, and most of it is treated artificially to ensure that they can withstand transport and looks ripe when on display. I’m sure most of you will have experienced produce never actually ripens, and instead remains firm for weeks on the worktop and has zero taste!

Of course, plenty of large-scale growers use artificial means to produce veg in the UK, such as growing in massive greenhouses and consuming huge amounts of fossil fuels so that they can have veg in plentiful supply all year round. This is something that small veg box schemes simply couldn’t afford and it completely goes against the ethics of organic growing. 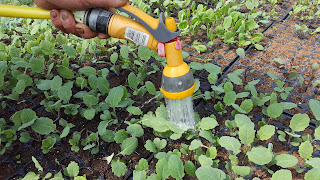 What does it mean for the customer?

Well, it means that there is very limited produce and variety on offer, and it also means prices are higher, which is why many veg box schemes do not operate during this period. We could close down for a few months until our crops start to come through, but that would mean abandoning our customers to mostly non-organic supermarket fruit and veg. However, we feel it is more important to have organic produce imported in order to better serve our customers and offer a greater variety (people get pretty sick and fed-up with eating parsnips, swede and kale for months on end), and this is what our customers want too. Therefore, we bring in the limited produce available from other organic farms throughout Scotland and the UK, and cast our net further afield for the items that don't grow here, including EU countries like Spain, Italy and the Netherlands.

We believe this is far less harmful to the environment than having food grow in  hothouses, which uses about ten times as much in fossil fuels for tomatoes alone. We do our best to ensure as locally as possible, always preferring the in-season items, which is better for the soil and for the wallet; and when a real choice is presented we will always choose the less travelled path to cut down reduce our carbon footprint. We hope you will agree that this is a far better solution than the alternative.